Rally of Hope for the Realization of a Heavenly Unified World 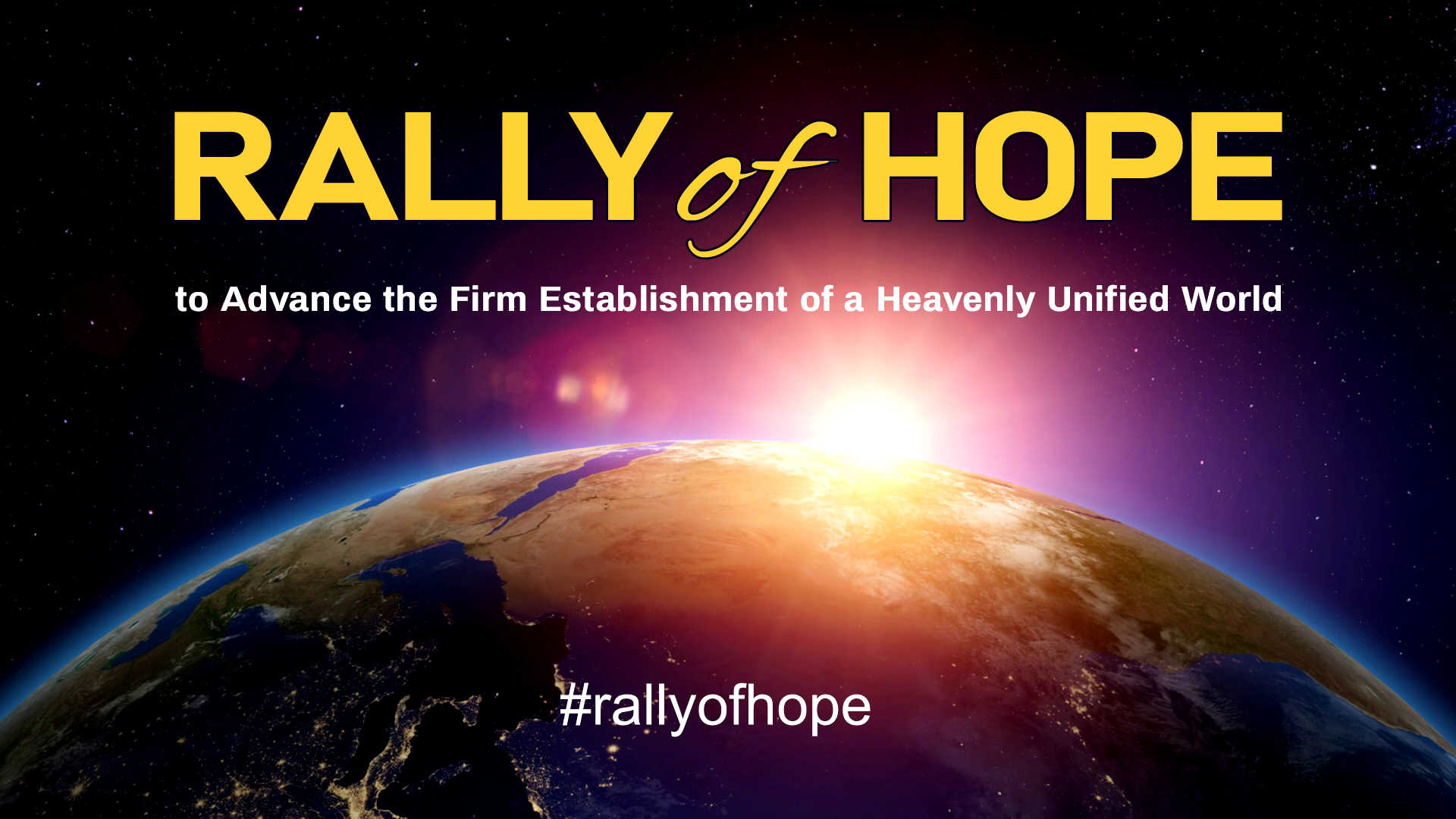 An estimated 100 million people tuned in to the Rally of Hope for the Realization of a Heavenly Unified World on August 8, 2020, a special program hosted by the Universal Peace Federation (UPF, an organisation affiliated with FFWPU) that streamed live on more than 70 broadcasting stations around the world as well as online. Global leaders, presidents, prime ministers, and foreign dignitaries took the stage, virtually joining the Mother of Peace Dr. Hak Ja Han Moon, co-founder of UPF, in delivering messages of hope and peace during the COVID-19 era.

“Human history has been a sad history of continuous conflicts, and even now, around the world conflicts are happening everywhere,” said Dr. Moon. “But God, our Heavenly Parent, is working to see the realization of His providence. It is our responsibility to attend God and unite centering on God as our Heavenly Parent. As long as Heavenly Parent remains the center of a family, community, or society, all problems can be solved.”

Translated in nine languages, people from 194 nations listened to Dr. Moon and other esteemed leaders speak about the current global health and economic crisis from the COVID-19 pandemic, as they espoused the UPF pillars of interdependence, mutual prosperity, and universal values to bring healing and peace to the world. Dr. Moon shared an analogy about the monarch butterfly, a species that regularly migrates from Canada to Mexico despite a two-month journey and very small wingspan. “Nature moves according to the principles that God created and we can see it in action,” said Dr. Moon. “It is the same in the animal kingdom. We wish to realize one family of humanity under Heavenly Parent … Let us become filial sons and daughters, patriots of a heavenly nation.”

“This Rally of Hope is taking place during an unprecedented time in history during the COVID-19 pandemic,” said President Sall. “Faith, confidence in science, and the resolve to act together will help us maintain hope, overcome trials, and overcome our common vulnerabilities. We need to act together because self-centeredness is not an option if we are to bring victory. Rather, we need to work in solidarity and human fraternity.”

“We’re facing COVID-19 with all the scientific and technological advances that humanity never had before,” said President Morales. “Let’s adapt ourselves; let’s take advantage of technology to inform and stimulate the intellectual coexistence of our people; and let’s show our true love to others with solidarity, fairness, equality, and justice for all.”

Many of the leaders underscored the importance of international collaboration and cooperation, echoing Dr. Moon’s urgency of patriotism and interdependence among nations—engendering mutual prosperity—instead of current trends toward nationalism. “At such times, there can be inclinations for nations to turn to easy but ultimately disastrous solutions like protectionism, socialism, and aggression with international affairs,” said former Prime Minister Harper. “That is why it’s essential that we understand our interdependence in this world; work together to rebuild our mutual prosperity; and act on shared values rather than zero-sum strategies. It’s important that we pursue these objectives … and recognize that history shows that the rights and freedoms of ordinary people are critical to creating and sustaining our prosperity and peace over time.”

Dr. Moon emphasized the importance of also unifying the Korean Peninsula, and its role on the world stage as the homeland of God’s providence. “May Korea become a nation of virtue that can stand as a beacon of attendance to Heavenly Parent,” said Dr. Moon, who has brought together many national leaders through UPF’s annual World Summit.

“We need more effort to follow the path of Dr. Moon to recognize that seeking peace, seeking understanding, and working together is the key to a successful future,” said former U.S. House of Representatives Speaker Newt Gingrich.

“There is a crisis in values, ethics, and social capital that underpin good governance and stable societies,” added Ban Ki Moon, former secretary general of the United Nations. “We need to heed this warning, and with foresight and empathy, seek for practical ways to coexist. UPF has a broad set of partnerships between government and civil society … and I believe UPF serves as a good model and will become a cornerstone to build lasting peace around the world.”

For more than six decades, Dr. Moon has continued to tirelessly work on numerous peace-building initiatives worldwide, sharing that humanity is one family and we are all God’s children transcending any barriers and affiliations. “God is the author of peace, and true peace cannot exist without Him,” said Pastor Paula White, spiritual advisor to U.S. President Donald Trump, in a special message of prayer and peace during the rally. “Family is the root of everything we are … There is one individual who understands and exemplifies family and that is Mother Moon. She has demonstrated that working with all people is possible if we adapt in our hearts love for the whole world based on living for the sake of others as she does.”

For more information, see the report at this link.