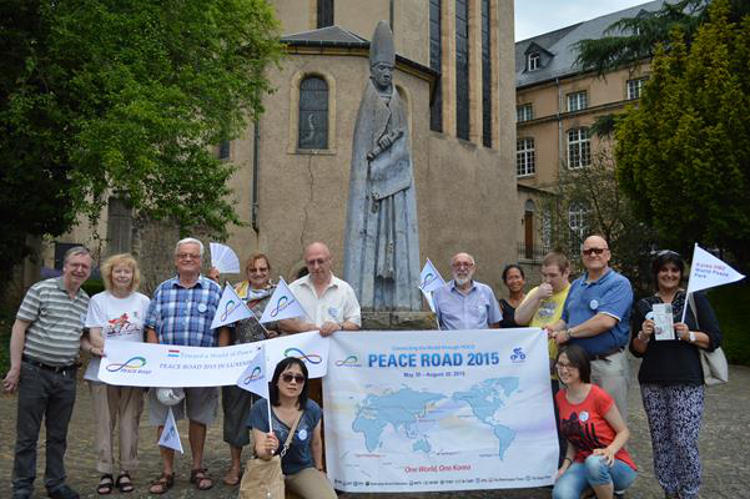 Many people may be familiar with a certain number of people and places without being aware of their connection with Luxembourg or, indeed, knowing where Luxembourg is! During our Peace Road Tour 2015, we visited a number of these places under the theme of European Unity and with the additional goal of putting Luxembourg, which is nestled between Belgium, France and Germany, firmly on the map. Here are the places we visited on one of the hottest days of the year with the temperature reaching 39°C.

(1)    Robert Schuman, born in Clausen, Luxembourg, was a French politician who is widely regarded as one of the founding fathers of the European Union. Just as Reverend Moon forgave his enemies, although Schuman lived through the terrible Nazi atrocities of WWII, as French Foreign Minister he had the spiritual force as a Christian to pursue a path of pardon and reconciliation and put an end to the vicious cycle of war and resentment which had continued in Europe for thousands of years. He was supported in this pioneering venture by the French President De Gaulle, the German Chancellor Konrad Adenauer and the Italian Prime Minister, Alcide De Gasperi. Watch the video. Voir la vidéo (français).

(2)    General George S. Patton Jr commanded the United States Seventh Army until 1944, when he was given command of the Third Army in France. Patton and his troops dashed across Europe after the battle of Normandy and exploited German weaknesses with great success, covering the 600 miles across France, Belgium, Luxembourg, Germany, Austria and Czechoslovakia. By the time WWII was over, the Third Army had liberated or conquered 81,522 square miles of territory. He is buried among the more than 5,000 soldiers at the Luxembourg American Cemetery and Memorial in Hamm, Luxembourg. Watch the video.

(3)    Schengen – It was here that the Schengen Agreement was signed, which led to the creation of Europe's borderless Schengen Area. Schengen is a village situated near the tripoint where the borders of Germany, France, and Luxembourg meet. It is true that this agreement was misused to prevent Reverend Moon from entering Europe for many years. Nevertheless, after years of efforts led by then European continental director, Dr. Yeon Cheon Song,  we most of all remember our victory in this case in which Luxembourg’s UPF secretary general, Dr Paul Frank, a retired judge, also played a key role. Watch the video.

(4)    Saint Willibrord is perhaps a less well known personage; however he was born in Northumbria, a region straddling England and Scotland, and came to Echternach in eastern Luxembourg in the late 7th century to Christianize the pagan North Germanic tribes of Frisia (today mostly a large part of the Netherlands and smaller parts of Germany and Denmark). He founded the Abbey of Echternach and is buried here. In contrast to his predecessors, he organised his missionary work with clever pragmatism, which is perhaps why he could achieve what no-one else could, as previous attempts to Christianize this region had failed. He is a good example for us today. Watch the video.

To conclude the tour and for our victory celebration, we visited the Holy Ground established in Luxembourg by Reverend Moon on 9 August 1965, as one of the 16 nations that contributed to the UN forces in the Korean War and which liberated Reverend Moon from certain death in a North Korean prison camp. Situated in the hills overlooking Luxembourg City, it has become rather difficult to get to. Watch the video.